The Race for the fastest
Frank Mechelhoff
update 8. Jan 2006

Before World War II the Zeiss Sonnar (1.5/5cm) was the paragon at 35mm film format, particular after inventing the lens coating in 1936. There were a very few lenses that were even faster, for special use like projection like the famous TACHON (Astra/ Berlin), a giant lens (enhanced triplet).

Since B&W films were 3 aperture-steps slower than present (color film about 5-6 steps slower!) the desire for fast lenses was much stronger than most photographs can imagine today. It was the time when free-hand picture-taking gets established. Flash-technique was primitive, there was no light-up flash, anyway usage of flashes was considered as ungentlemanly and artificially for ambitious photographs - and for some, this continous today... Of course nothing like automatic exposure, autofocus or something like that was more than a dream... It was called "automatic" when the rangefinder, or meter was coupled, and you could set it manually! Beside the need for speed there was also a strong aspect of markteing and prestige for the manufacturers, which infected minds of photographs in the whole world avidly. 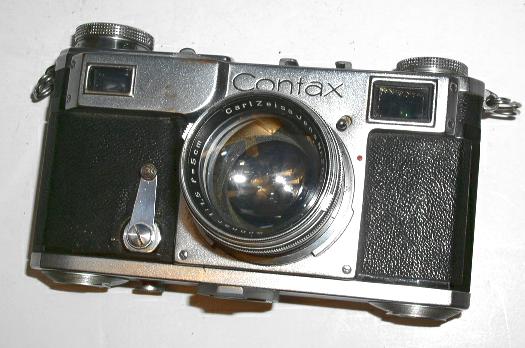 After1945 the Zeiss Sonnar was copied and enhanced outside of Germany. The Zeiss lens plant was disassembled by the Russians and build-on in the Sovjet Union (the Sonnar copies are produced there mostly unchanged until present). NIKON hired hundreds of women who enhaned the optical calculation of the 1.5/50 Nikkor using slide rules, modyfing it to a faster f/1.4. I don't know if the difference was proved but the lens was a great success - and nowadays f/1.4 is considered as "full f/stop" between 1 and 2. This lens was build in every usable camera mounts and is considered a very good lens in the close focus area, until present.

At this time the first high-speed Planar-Designs were build and started to disembark the Sonnar types. Thanks to better coating technique the need to combine optical elements to the lowest possible number in order to avoid unwanted reflections (flare) was abated. They could be dissolved with air spaces with less number of cemented groups which lowers procuction cost too..


In 1956 CANON developed a 1.2/50mm, the first very high speed Planar-type (which is the common design type today) and the fastest Leica screw mount lens (M39). With compact cameras it looks impressive but not inharmoniously. Expensive at the beginning, Canon cut its price to a half during serial production (which German company had done this?) Optical performance wasn't so great since coating and glass technique were a bit stressed with this 7-elements design. An outward detail showing the end of the "copying era" and increasing self-confidence was the new look of black lenses. The 1.2/50mm was one of the first with dual-color (black and silver) mounting. Both Nikon and Canon created these "professional" look, a fashion valid almost 35 years until the present "white" look for fast telephoto lenses with Low-fraction glass. Color or enamel was required to protect the surfaces of modern, less-weight alloy mountings. The first Canon lens with a black knurled focussing ring was the small  2.8/50 released Jan. 1955. Nikon switched all RF lense series to black 1956. German companies like Zeiss and Leitz preferred the "chrome" look, as well as the brass lens moutings, solid but heavy like their cameras, long time later yet. 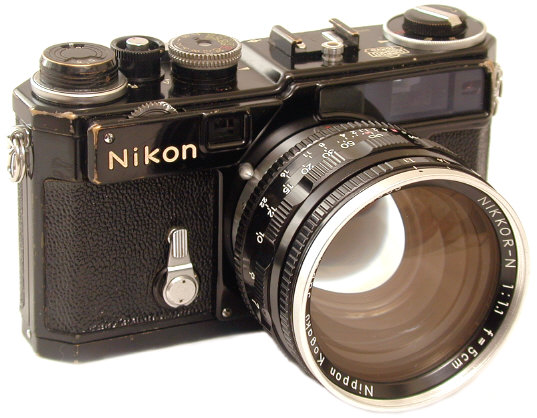 In the same year ZUNOW outrun all the competitors with a 1.1/5cm, the fastest design ever produced derived from a Sonnar (9 elements/ 5 groups design). NIKON draw level with the 1.1/5cm NIKKOR-N (a high-corrected 9-element/ 6 groups Planar design). These two were the most beautiful, rarest and most expensivst lenses of the light giants fraction. The complicated design was far beyond coating technique leading to flared pictures. And the Nikkor had a special (in practical use not insubstantial) quirk: it was so massive that through it destroyed it's inboard-bayonet when adjusted with the camera focussing wheel.! An expensive threat! So a second series has to be produced with outer bayonet and own focussing flange. This gaves the mounting a more harmonic impression. 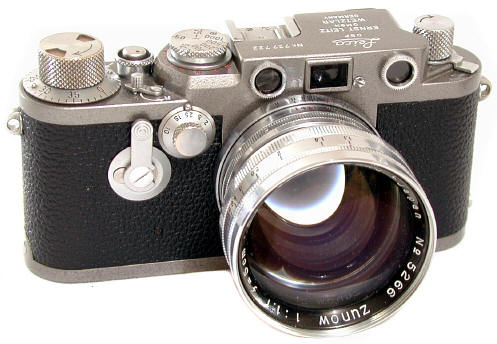 In 1961 CANON presented the 0.95/50mm which still keeps the record for the fastest (serial) lens in series for film photography. Similar in design to the 1.2/50 with extremly curved glass, which was possible due to new-developed sorts of glass for Japanese companies. Some of them were slightly radioactive and have a slightly yellow depth of color. 7 elements in 5 groups showed Canon's attempt to minimize glass-groups for less refraction and flare due to limited coating technique. It took Leitz 15 years to produce a lens in the same speed league - the 1.0/50 Noctilux. In 1989 Canon presented the "remake" of the f/1.0 class... a 1.0/50 lens for SLR (USM), a 11-elements/9-group Planar design with two aspherical elements.

Even in the 1960's the practical use of this light giants was disputed since there were some good performers with fastest f/1.4, not to speak about f/2 lenses. In the late 1960's film speed keeps up significantly and nowadays there is no "real" need for super-speed in practical use, except for their very small depth of field wide-open (2cm at 1m distance) which can be a nice effect for portraits. You can test such a lens for detail sharpness wide open but it's obvious that this is not the reason why you pay 8x the price of an f/1.4 lens and carry around 3x its weight.

These lenses were developed in a time when there was big money in the business for Research and Development, to re-design series of cameras and lenses completely every 5 years, to compete against the Germans and each other. Nowadays cameras are cheap, film is dying, and traditional companies like Nikon and Canon are minimizing their R&D expenses at traditional (non-digitally) segments, therefore no big improvement on this area is longer to await . So these terrific, enthusiastic, generous - up to screwy - era will never come back. 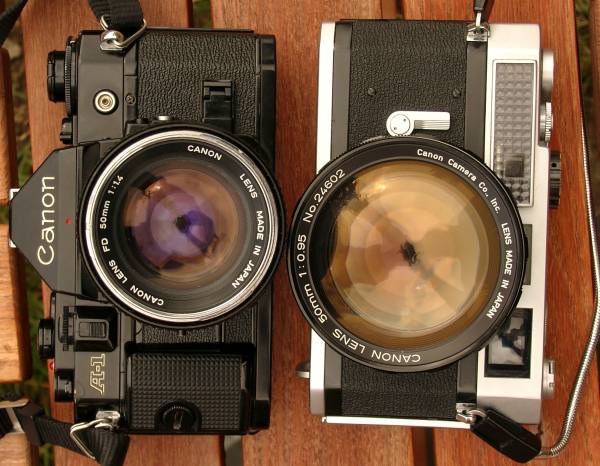 The 1.2/55 ASPHERICAL (Canons super fast lens 12 years later) is even bigger in size and has similar weight.


Is the "Race for the fastest" already history?

Not yet. LEICA followed 1976 with the 1.0/50mm Noctilux, which remains unchanged since then - their results needs to be better than the Canon lens alone for its price and name. Even if the design is quite antique in the meantime...
Probably the best high speed lens of CANON was the FD 1.2/55 AL/ ASPHERICAL which second element was hand-dressed to the aspherical form
Since 1989 there is another Canon f/1.0 for the EOS, 11 elements in 9 groups, Autofocus/USM und more than 300g heavier than the old "dream lens"...3x the weight of a 1.4/50 and eight times its price - this answers the question for most photographs except very few...

Super-Fast Short Telephoto Lenses
It is also particulary usefull for short telephotos (portrait telephotos called by some people) to be as fast as possible ... This story continuos here.